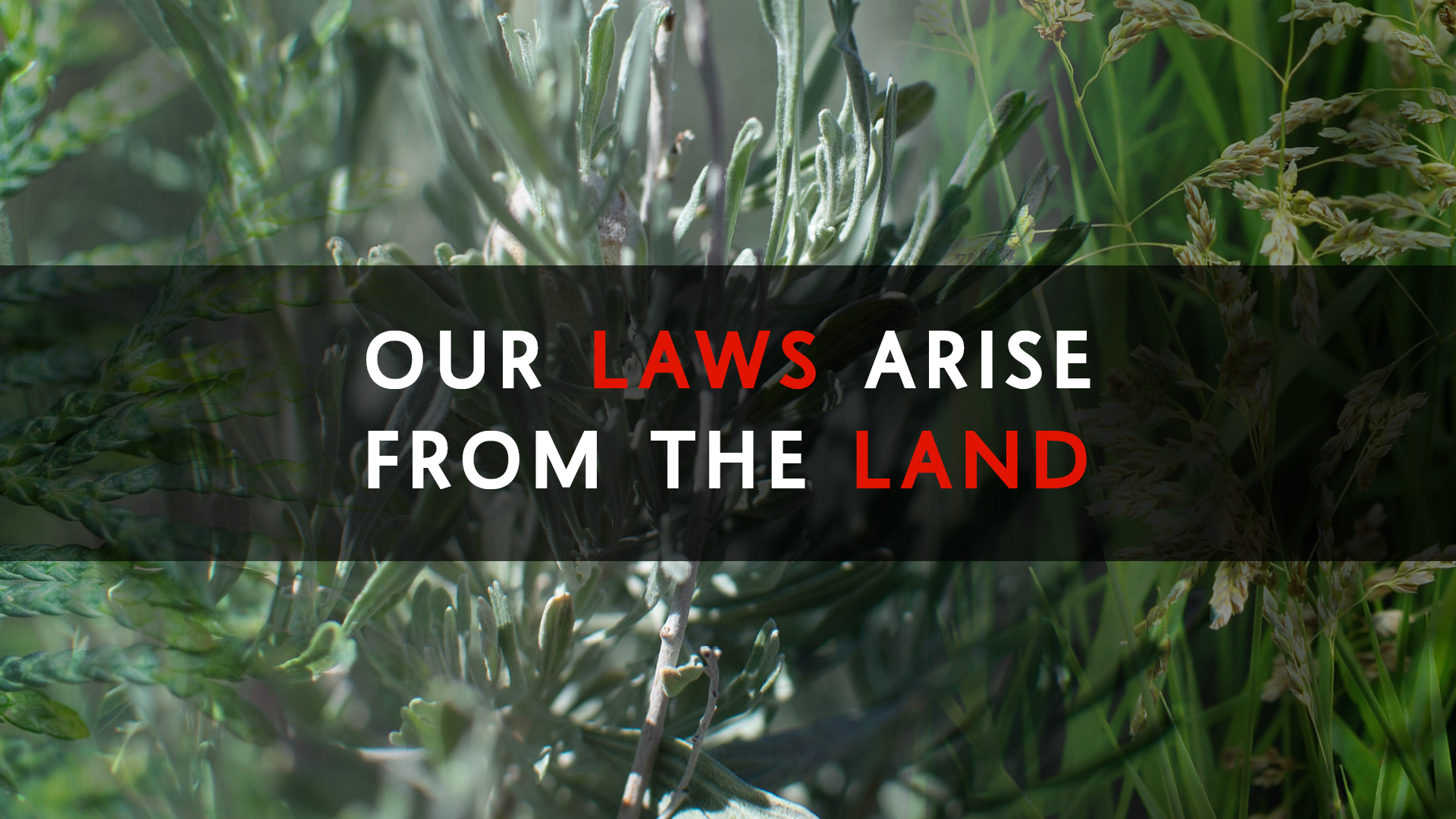 This resource page was created by the BC Specific Claims Working Group (BCSCWG) to support BC Indigenous Nations to begin a discussion of how Indigenous laws can be utilized to transform the specific claims process by including Indigenous laws and legal protocols in resolving historic land disputes.

What are Specific Claims?

The specific claims process is Canada’s approach to redress historical wrongs related to the illegal alienation of Indigenous lands, mismanagement of Indigenous assets held “in trust” by the federal government, and the non-fulfillment of treaties.

The materials here as intended as a starting point to encourage Indigenous Nation to consider the ways in which their own protocols and legal orders may contribute to the resolution of outstanding historical grievances.

The specific claims process is Canada’s approach to redress historical wrongs related to the illegal alienation of Indigenous lands, mismanagement of Indigenous assets held “in trust” by the federal government, and the non-fulfillment of treaties.

The materials here as intended as a starting point to encourage Indigenous Nation to consider the ways in which their own protocols and legal orders may contribute to the resolution of outstanding historical grievances. 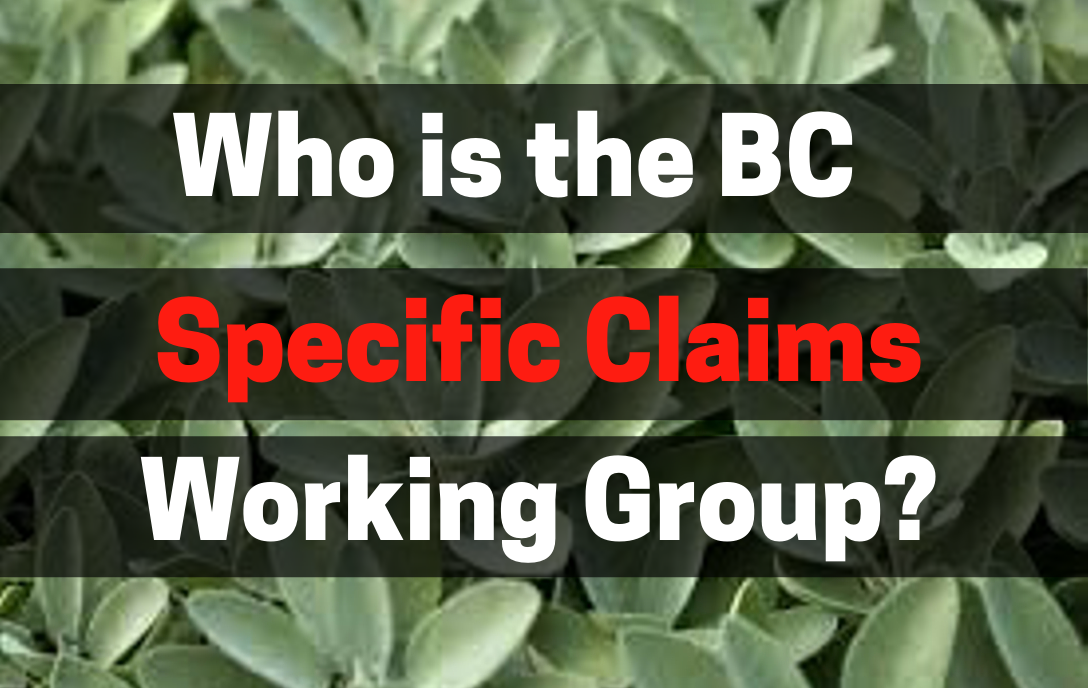 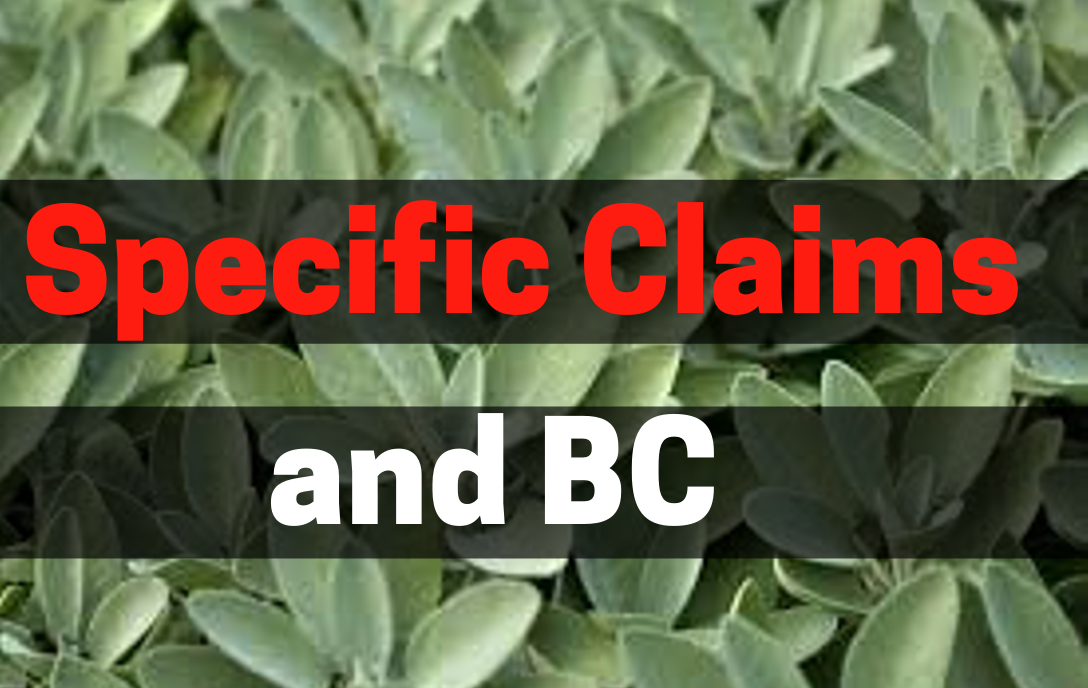 Finding a process that works for the claims of BC Nations is essential, as unresolved claims have real, ongoing impacts on communities and cause delays in the system overall. The BCSCWG is committed to working with Indigenous Nations, partner organizations, and government to advance the just and timely resolution of specific claims.

United Nations Declaration on the Rights of Indigenous Peoples (UNDRIP)

Articles 8, 27, and 28 of the United Nations Declaration on the Rights of Indigenous Peoples call for the creation, implementation, and enforcement of robust mechanisms and processes to prevent the dispossession of lands and resources, to recognize and protect Indigenous laws, rights, and tradition, and to ensure adequate compensation and possibilities for redress when lands and resources have been non-consensually alienated or otherwise damaged.

The Truth and Reconciliation Commission’s Call to Action 45(iv) recommends that Indigenous laws and legal traditions be recognized and integrated in “processes involving Treaties, land claims, and other constructive agreements.” 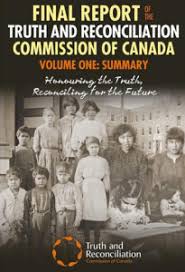 The current assessment and negotiation processes are biased and unfair because they are rooted in colonial premises whose endpoint is the disintegration of Indigenous sovereignty and fail to consider and incorporate Indigenous legal principles and protocols.

Indigenous Nations must be equal partners in claims resolution and that processes for redress must meaningfully incorporate Indigenous priorities, teachings, and legal principles. As each Indigenous Nation has its own laws, the focus must be on legal pluralism within specific claims policies and processes.

Video Overview: Our Laws Arise from the Land

The impetus to produce the video Our Laws Arise from the Land video came directly from Indigenous Nations’ calls to integrate their laws and legal orders into all aspects of the specific claims resolution process.

In June 2017, the Assembly of First Nations hosted a session in Vancouver which invited Indigenous Nations to speak about aspects of the current specific claims process.

Overwhelmingly, BC Nations called for an independent claims resolution process that respects and integrates Indigenous sovereignty and laws. Indigenous Nations cited their need to adhere to and enact their own legal principles, the United Nations Declaration on the Rights of Indigenous Peoples, and the Truth and Reconciliation Commission’s Calls to Action, which recommend that Indigenous laws and legal traditions be recognized and integrated in “processes involving Treaties, land claims, and other constructive agreements.”

These recommendations are articulated in a submission to the AFN made by the BCSCWG.

The BCSCWG approached Nlaka/pamux lawyer Ardith (Walpetko We’dalx) Walkem of Cedar and Sage Law to speak on video about the necessity of integrating Indigenous laws into specific claims processes.

A New Way Forward: An approach to resolving specific claims that is based on Indigenous laws.

Currently, Canada is in an inherent conflict of interest – it created and controls access and funding to participate in the specific claims process and unilaterally determines if claims are valid and if they will be negotiated. Contrary to Indigenous legal principles, Canada’s approach is adversarial and emphasizes mitigating risk rather than healing relationships.

Accords among Nations (both pre-and post-contact) illustrate how Indigenous laws work to address disputes and past wrongs and create living agreements. Indigenous protocols and declarations reflect notions of “right relations” and the relationships between people and other beings across time.

Specific claims resolution should reflect that Canada and Indigenous Peoples are involved in an ongoing relationship, which must be tended to as a living agreement.

A New Way Forward is needed, founded in Indigenous legal traditions, where:

Indigenous legal traditions for resolving conflicts could be a powerful step in achieving a new relationship between Indigenous and non-Indigenous Canadians in the area of specific claims.

The material and cultural impacts of reserve cut-offs and the loss of fishing grounds, failures to protect villages and culturally important sites, and the ways in which colonial gender bias have impacted Indigenous Nations in BC.

Discussion – Seeking alternative forms of restitution, culturally meaningful remedies, and how their own legal protocols and laws can have significant impacts on the resolution of these historical grievances.

The BCSCWG has developed adaptable, interactive training materials that can be used to train staff and decision makers within CIRNA’s Specific Claims Branch and Department of Justice, as well as Indigenous communities.

The training, built on an embodied learning model, situates Specific Claims in the context of the colonial history of Canada, Indigenous laws and the need to make space to consider and reflect Indigenous laws.  For more information and to obtain a copy of the training materials contact us.

There is a need to creatively and meaningfully include Indigenous laws and ways of reaching resolution in resolving specific claims.

A tool of Aboriginal Title denial and often a symbol of a failure to honour treaty promises.

Sometimes missed is the way in which Canada’s reserve policies were part of larger efforts to deny Indigenous laws.

While the reserve system was being implemented, laws and policies were enacted to prevent Indigenous Peoples from advancing their rights through legal or political action:

The original policy was that all village sites, resource use areas, grave sites, and enclosed (fenced) lands would be reserved for Indigenous Peoples.

In many cases, the lands that were actually reserved or set aside were lands that were not considered usable or arable lands by Newcomers. In some cases, the reserves were difficult to access, or were otherwise unable to support Indigenous Peoples and their economies.

Even after reserves were created, they were subject to cutbacks where Newcomers and their governments or industries found other uses for lands reserved for Indigenous Peoples.

What are the costs of failing to act in a just and fair manner in specific claims?

The costs to Indigenous Peoples (and Canada as a whole) of not resolving specific claims in a way that builds respectful, equitable relationships stretches far beyond the risk of litigation and the economic costs of settling these claims. The broken specific claims process can actually worsen relations between Indigenous Nations and Canada.

Indigenous Peoples’ experience of unresolved claims over generations has been one of inequality, poverty, and disconnection.

Indigenous laws are not reflected in the process or outcomes.

In 2014, James Anaya, then-United Nations Special Rapporteur on the rights of Indigenous Peoples, observed that Canada’s claims processes “have contributed to a deterioration rather than a renewal of the relationship between indigenous peoples and the Canadian state.”

Reconciliation will not be possible in specific claims absent Indigenous laws recognition. In 2015, then–Chief Justice Beverley McLachlin spoke of the need for “concepts of Indigenous justice and the legal processes of achieving justice” to be incorporated in Canadian justice discussions as a matter of access to justice.[3]

Justice Murray Sinclair, in talking about the findings of the TRC, has said that in many ways the war against Indigenous Peoples in Canada was waged using law as a weapon.

“Many Aboriginal people have a deep and abiding distrust of Canada’s political and legal systems because of the damage they have caused. They often see Canada’s legal system as being an arm of a Canadian governing structure that has been diametrically opposed to their interests.”

Indigenous Worldviews of Loss and Resolution:

Indigenous laws are often concerned less with rights than with relations (not only amongst humans but also with the living world) and question “what is the right action?” or “what is the right way of deliberating or thinking about this?” in light of the need to consider, reflect, and maintain relationships. This principle is reflected in Kukpi7 Ron Ignace’s statement that our laws tell us: “How to be great and good.” Canadian/Western law may be more concerned with “rights” and questions such as: “What I am entitled to?” “Where am I protected from interference?” or “What am I obligated to do?”

Many Indigenous Peoples share the worldview (defined differently within their own territories and according to the life the territory is shared with) of seeing the land and water, animals, fish, birds, and plants which live upon it as living, imbued with spirit, and existing in a reciprocal relationship with Indigenous Peoples. A failure to create or protect reserves interfered with and displaced a broader web of relationships, and a just resolution of specific claims cannot result unless that broader range of relationships is considered.

To resolve the damage created by the failure to set aside or protect reserve lands requires looking at the loss from the Indigenous point of view.