Nearly two years after permit proposal by Imperial Metals, opposition from British Columbia, downstream stakeholders in Washington State and Tribes and First Nations has only increased

Media Gallery: Permission with photo credit for The Wilderness Committee

VANCOUVER, B.C. - Today, an international coalition of more than 200 conservation, recreation and wildlife groups as well as local elected officials, businesses and Tribes and First Nations opposing a pending mining permit by Imperial Metals in the headwaters of the Skagit River continues to grow. Several new letters were submitted to British Columbia Premier John Horgan and the recently elected relevant Ministers to demonstrate the increasing opposition on the mining threat in the Skagit headwaters. The letters include:

“The latest group of letters are intended to ensure that the newly elected Ministers in the BC government are fully aware of the diverse and growing opposition to the pending mining permit in the headwaters of the iconic Skagit River,” said Tom Uniack, Executive Director for Washington Wild, a statewide conservation organization who is coordinating an international coalition of U.S. and Canadian stakeholders and Tribes and First Nations in opposition to the proposed mining and logging in the Skagit Headwaters. “The potential impacts to two of the most beloved Canadian parks and to downstream values in Washington State are both unacceptable and unnecessary.”

The Skagit Watershed is also critical to the health and well-being of the region’s residents and local recreation-based economies. The current mining and logging threats are located in a “donut hole” shaped area sandwiched between Manning and Skagit Provincial Parks. Both parks and other recreational destinations are major outdoor recreation destinations just a day trip from the greater Vancouver metro area and draw more than a million visitors each year.The proposed mining activities include creating access roads, conducting surface exploration drilling with associated water supply and catchment sumps, and mechanical trenching over a five-year period of continued disturbance.

"After a century of blasting, drilling and tunneling to find a workable mine with no luck whatsoever- it's time for British Columbia to extinguish Imperial Metals' mineral tenure in the Skagit Headwaters Donut Hole and then, with First Nations, protect the place,” said Joe Foy, Protected Areas Campaigner, Wilderness Committee. “BC must also enforce an Imperial Metals cleanup of the site, which is strewn with a hundred years worth of garbage, waste rock and mine drainage left behind by years of fruitless exploration." -

The company proposing to mine in an unprotected area of the Skagit Headwaters, Imperial Metals, was responsible for the infamous Mount Polley mine disaster of 2014, which spilled more than ending 24 million cubic meters of wastewater laden with arsenic, lead, selenium and copper into the Fraser River watershed, one of the biggest environmental disasters in Canadian history.More than five years later, no charges or fines have been filed against Imperial Metals.

These headwaters are unceded Indigenous lands. Upper Skagit, Stó:lō, Syilx and Nlaka’pamux people have accessed the Skagit headwaters forests, meadows and streams since time immemorial for essentials such as clean water, wild foods, ancient trees and other cultural materials needed for medicines and spirituality. The BC Government is currently engaged in formal consultation with 16 First Nations over concerns about the mining proposal.

“The proposed mining in the Skagit headwaters poses a significant and devastating threat to our inherent Indigenous Title and Rights and the fish, wildlife and natural and cultural resources on which our existence is based,’ said Grand Chief Stewart Phillip, President of the Union of BC Indian Chiefs. “We call on the British Columbia government to honour their obligation to our people and preserve benefits for all of us who call British Columbia home, and exercise their authority to deny this permit. We need a provincial government that will stand up for the environment and uphold the UN Declaration on the Rights of Indigenous Peoples.”

In Washington State several Tribes have formally opposed the mining permit because it could threaten their hard-fought treaty rights for hunting, fishing and gathering in the Skagit basin. The Swinomish Indian Tribal Community has passed a formal resolution opposing the mine and plans to submit a joint letter signed by Tribes and First Nations to the British Columbia Minister of Indigenous Relations and Reconciliation in the coming days

The Skagit Watershed is a transboundary issue. Potential mining would impact recreational and economic benefits on the Canadian side of the border as well as fisheries and water quality benefits as the Skagit River flows through Washington State, winding through the scenic North Cascades National Park, the Mt. Baker Snoqualmie National Forest and through the renowned Skagit River Valley before reaching the Puget Sound. The Skagit River provides one third of the freshwater inputs to the Puget Sound and supports the largest populations of threatened steelhead and chinook salmon in the Puget Sound and the largest run of chum salmon in the conterminous U.S.

“Here in Skagit County, the Skagit River is not just our namesake it is central to how we live, work and play,” said Richard Brocksmith, City Councilmember for the City of Mount Vernon, WA. “A proposed mine in the Skagit Headwaters would threaten the millions of dollars of investment in salmon recovery, the supply of clean water for farming and drinking and the health of Puget Sound while contributing zero financial or social benefits to our community,”

In 1984 a treaty was signed by the US and Canada and the accompanying Agreement was signed between British Columbia and the City of Seattle.to resolve disputes over Ross Dam and to maintain the environmental integrity of the Skagit Watershed. In addition, it created the Skagit Environmental Endowment Commission (SEEC) to administer this collaborative partnership.  Both governments established SEEC’s primary mission: (1) To conserve and protect wilderness and wildlife habitat, (2) To enhance recreational opportunities in the Skagit, and (3) To acquire mineral or timber rights consistent with conservation and recreational objectives. The letter argues that the proposed logging and mining in the “donut hole” is inconsistent with the spirit and intent of the 1984 treaty. It will have significant impact on the wilderness, wildlife habitat, and fishery resources of the Upper Skagit River.

“For three decades SEEC has been looking for opportunities to retire the outstanding mineral rights in the Skagit Headwaters to ensure the long-term protection of this important watershed,” said, Leo Bodensteiner, U.S. Co-Chair of the Skagit Environmental Endowment Commission. “We have a real opportunity to resolve the potential threat this presents to the Skagit and create a win-win-win for British Columbia, Washington State and Imperial Metals.”

Prior to the pending mining threat, the Donut Hole area of the Skagit Headwaters was threatened by clearcut logging. In December 2019, Doug Donaldson, British Columbia Minister of Forests, Lands Natural Resource Operations and Rural Development announced a ban on future logging in the Skagit Headwaters as a direct response to the opposition by this international coalition. The statement read:

“Effective immediately, BC Timber Sales will no longer award timber licenses in the Silverdaisy area, ensuring no additional commercial forest harvesting occurs in that area. We’ve heard loud and clear from individuals and groups on both sides of the border that logging should stop in the Silverdaisy, and we’re making sure that commercial timber harvesting in that area does not continue.” 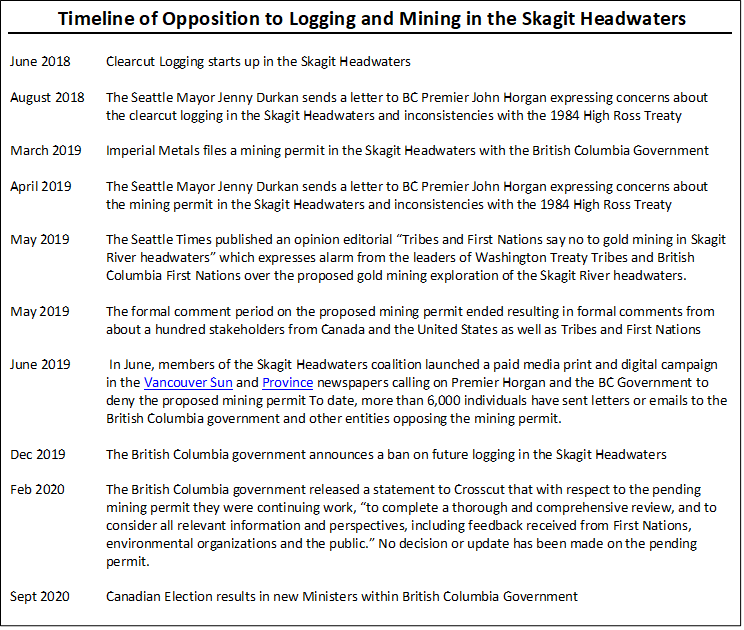