(Coast Salish Territory/Vancouver, B.C. – February 12, 2018) The Union of BC Indian Chiefs (UBCIC) is shocked and outraged that on February 9th, 56-year-old Gerald Stanley, a white settler living in Biggar, Saskatchewan, was found not guilty in the murder of Colten Boushie, a 22-year-old man from the Red Pheasant First Nation.

Stanley shot Boushie in the back of the head while Boushie slept in his car on Stanley’s rural farm. His legal counsel convinced the seemingly all-white jury that his semi-automatic hand-gun went off accidentally- an extremely rare “hang-fire.”

Grand Chief Stewart Phillip, President of the UBCIC, stated, “Our hearts and prayers are with the family of Colten Boushie.  We are totally and completely infuriated at the absolute injustice that has taken place with the acquittal of Gerald Stanley.  Simply put, Colten Boushie did nothing to deserve being shot by Stanley- he was sleeping at the time.  His mother did nothing to deserve having her home raided shortly after Colten was shot- she had just lost a son.  The disturbing facts of this case shine a glaringly harsh light on the sheer and blatant racism that exists both in Canadian society and in the Canadian justice system.

We join with thousands of voices across the country demanding an improved justice system with elimination of the system of peremptory challenges in jury selection, and we call for the verdict to be appealed, for appointment of an independent prosecutor for the appeal, and for appointment of a commission of Inquiry, followed by the necessary reform of law and policy.  Even that is not enough. Ultimately, we join the call for ground-breaking change to the appalling and devastating way that Indigenous People continue to be treated in this country.”

Chief Bob Chamberlin, Vice-President of the UBCIC, continued “Colten Boushie’s tragic fate shows that our children are not safe, and we are not safe, from the everyday racism that pervades Canada, and from the institutionalized racism in our courtroom.  If reconciliation exists at all today, it is no more than a thin piece of paper wrapped around the fractured relationship that Canada has to Indigenous peoples.”

Chief Judy Wilson, Secretary-Treasurer of the UBCIC, concluded “Unfortunately the Colten Boushie case is not an isolated incident here in Canada and many of our People do not find any justice in this colonial system.  Their human rights are unrecognized, especially our young people who are incarcerated and our children who are removed from their homes and placed in childcare. Canada must fully implement the United Nations Declaration of the Rights of Indigenous Peoples so our People will at least have a basis of fundamental rights not provided within the Canadian system.” 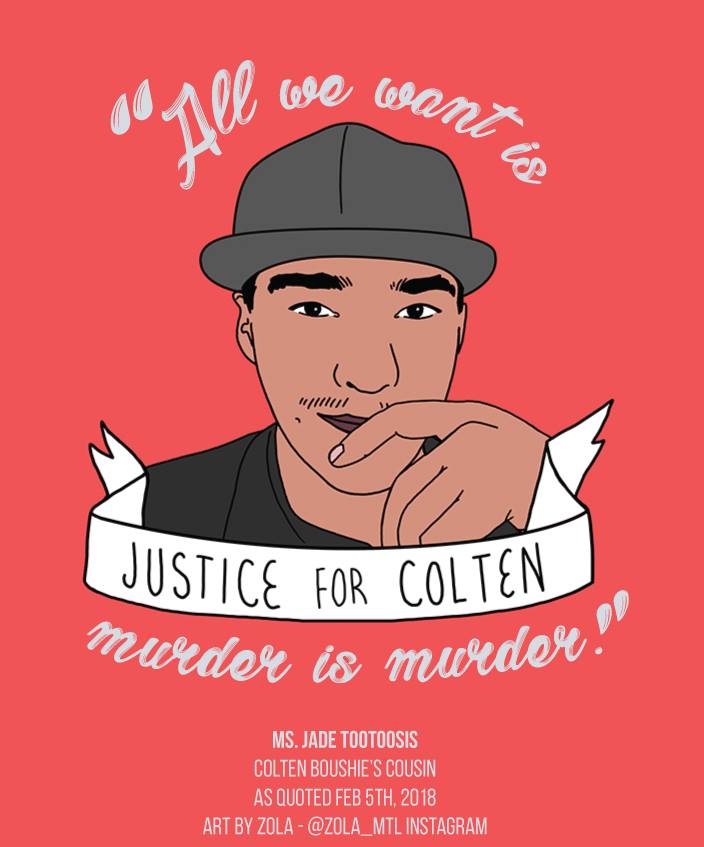 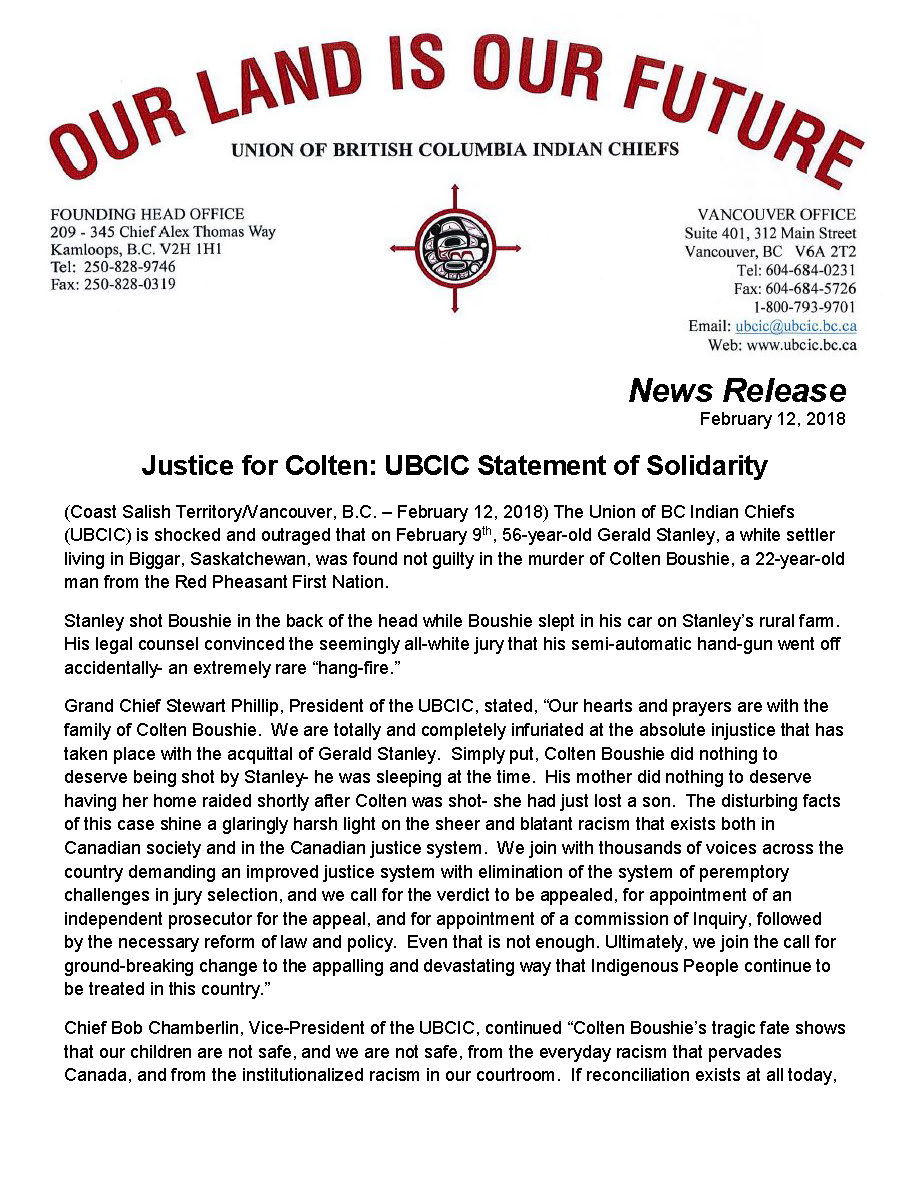 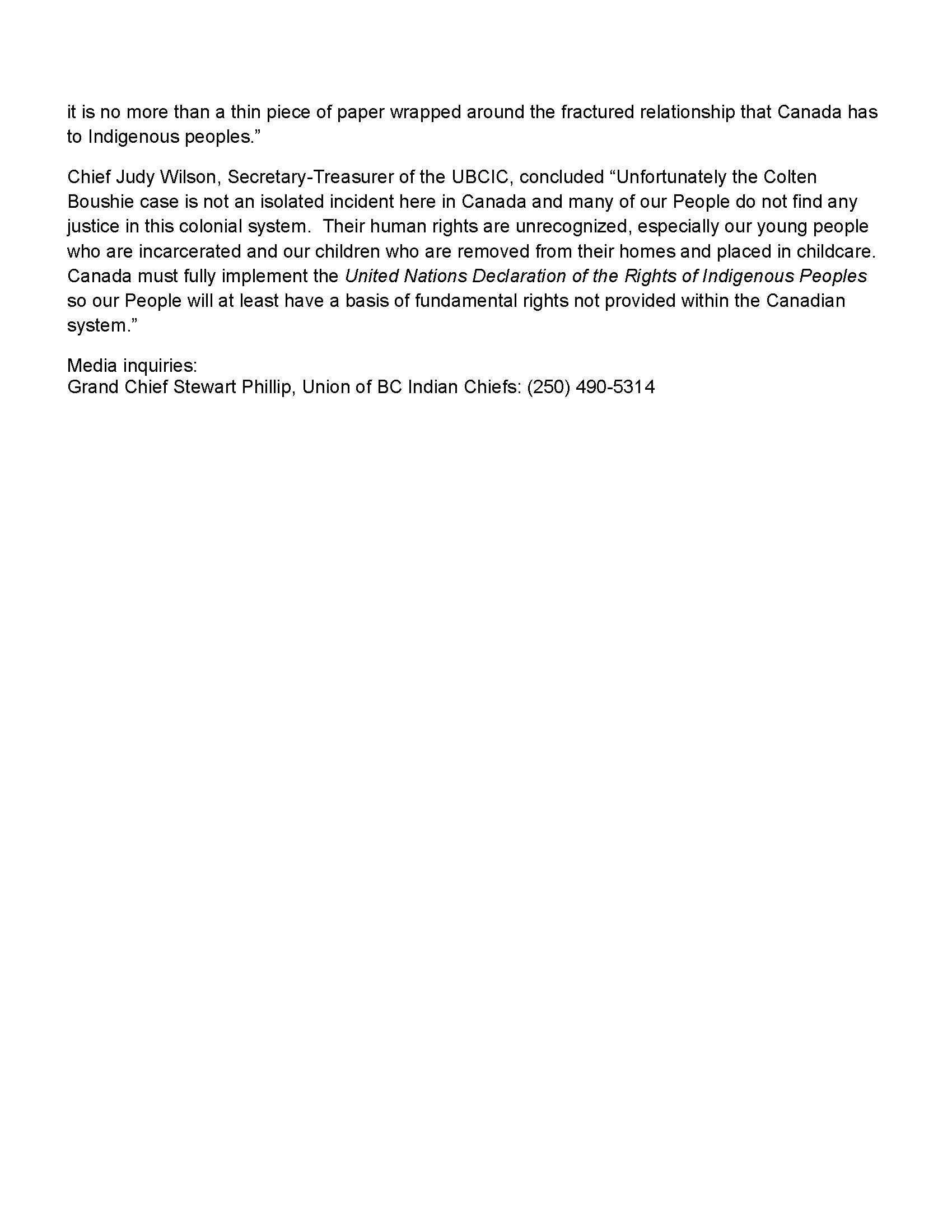